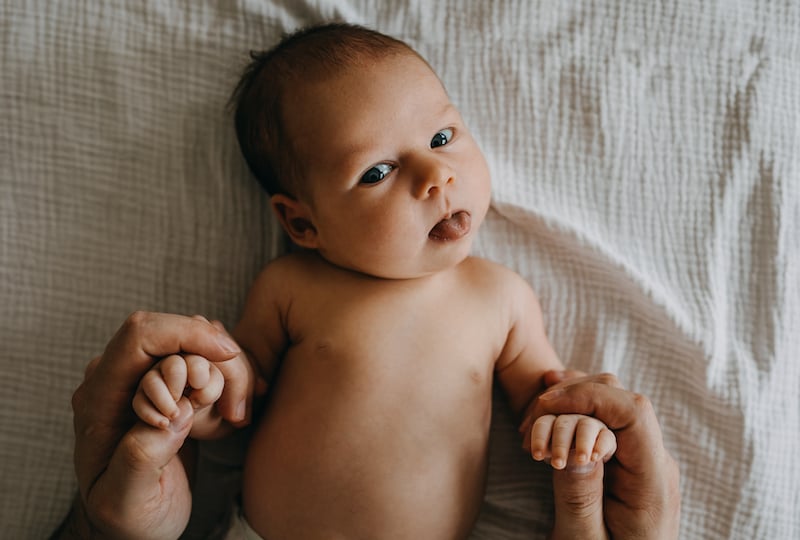 When you are with your baby you are helping their brain develop. How you interact with your bub will be making connections happen in their brain. It might seem like nothing when you change a nappy or talk to them about something they can see. But for your baby it will be sinking right into their growing brain. Don’t underestimate how important your are.

It might seem an incredible claim, but poking out your tongue at a baby could be a crucial part of developing her brain, and playing ‘peek-a-boo’ could be just what is needed for your baby to become a person with their own thoughts and personality. However, that’s just what the science tells us…

One of the earliest ‘games’ that you can play with a baby is imitation, and it is through imitation that the crucial links are made in your baby’s brain.

Imagine that you are sitting in front of your young baby; she has had a feed, is not too sleepy, and is looking at you. If you poke out your tongue, you are likely to see something happen. Her tongue will appear, sometimes off to one side and maybe barely visible, but if you repeat the action you are likely to get another pink, poking tongue response.

For many fathers this level of imitation seems like a minor achievement, hardly something to brag about. But when you think about what is involved, it is an amazing feat.

In the first place, as anyone who has played any sport or learnt to dance knows, getting your muscles to do what you tell them is not always easy. For a baby, all the control systems are just developing, so getting tongue and mouth muscles to work together so that the jaw opens a little, the lips separate and the sixteen muscles of the tongue move it forward might be more of an achievement than you or I swinging a smooth nine iron.

But the muscle control is not the really amazing part. To appreciate the marvel of imitation tongue- poking, you have to put yourself in the position of the baby. Think about it from her point of view. You are lying in the cot wondering how to sort out all the information that is rushing into your brain from the world. You see a ‘face’ that you recognise – it has the two eyes, nose and mouth shapes that are familiar. The face stays in front of you for a time and then a pinkish bit suddenly appears. Well, what in the world is that supposed to mean?

The truly amazing skill a very young baby can show you is that she understands, in a rough sort of way, that you are playing a game with her.

A SPECIAL PIECE OF BRAIN EQUIPMENT

The baby has no mirrors, so cannot see her own tongue; and she cannot know what you are seeing, so when you poke out your tongue, she has no way of knowing which piece of her own body is the tongue, and no way of knowing that you will understand the game of imitation if she did manage to do what you are doing. So how does a baby begin to join in this game?

In particular sections of the brain, ‘mirror neurons’ are already in place to start working immediately after the birth.

Mirror neurons are a special type of brain cell; their role is to ‘fire’, sending signals to different parts of the body. Some neurons are specialised for movement so that they ‘fire’ (send a signal) when the baby wants to perform a particular action, such as lifting a hand or opening her lips. But mirror neurons are not ordinary neurons, since they have an additional, astounding ability:  they are able to ‘fire’ when the baby sees the same action performed by another person.

This is how, we now think, the baby can see you poke out your tongue for the first time and already know how to do this action.

The mirror neurons firing away while the baby sees you then tell her how to copy the action – and before you know it, the two of you are communicating!

And this is the key, of course, to why the baby would bother imitating. When you take turns to make rude gestures at each other, this is communicating. Moving your body parts such as your tongue is the first way that your baby has of sharing a ‘conversation’ with you, something that she has been trying to do from Day One.

Mirror neurons make early communication possible, since even a one-day-old baby may be able to ‘read your mind’ in some ways with their in-built mimicking neurons.

But there is plenty of learning involved, too. Mirror neurons may allow babies to start communicating, but they need plenty of practice to build up the circuits in their brains so that that they can understand other people’s feelings and intentions. In peek-a-boo, for example, which is a favourite game of infants after about four months, your baby is learning several things at once. The sequence in peek-a-boo is straightforward: make sure that the baby is looking at your face, then hide your face from the baby’s view with your hands, a pillow or some other object, and then, after a short time, whip away the cover and say ‘peek-a-boo!’ or something like it. Babies not only respond positively by showing their excitement and pleasure, they are also keen to do this over and over again.

The disappearing and reappearing of your face is a baby’s way of learning what is permanent in the world even when it is hidden for a time. The build-up of excitement as your face remains hidden before suddenly popping into view is useful practice for concentrating on one event (rather than shifting attention to other objects in the surrounding area), and for managing the rapid increase in heart rate, breathing, and quick body movements that come with the surprise of you saying ‘peek-a-boo!’ Turn-taking, which is thought to be an important aspect of language learning, is also being embedded in your baby’s mind. But it would be a mistake to separate the skills and knowledge aspects from the social aspects of this interaction.

The key to the whole way that babies learn is the relationship that is built between you, the father, and the baby.

We know from studies which map babies’ eye movements, for example, that when they play peek-a-boo, babies do not simply look around your face, they scan your eyes particularly closely. Infants with autism do not follow this pattern: they scan the face when the parent is saying ‘peek-a-boo!’, but they look more often at the mouth, presumably because this is where the sound is coming from. Babies who do not have an autistic disorder are looking at the eyes, because it is the eyes which give the most information about the parent’s emotions.